Hehehe Kasala don burst...all up in this place!!!!! 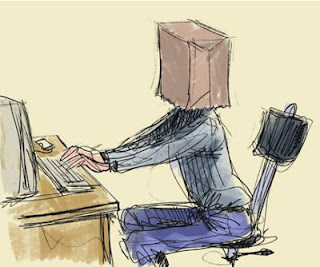 I wrote a piece herein some months back, about a very random incident where i discovered that a friend's wife owns an annonymous blog, and she knew that i knew. My ever-sleuthful and resourceful self, I had neatly peeled away every facade and firewall she had set up, leaving no room for denial until she broke and begged me to keep a secret. I cannot recall if i ended up deleting that particular entry, but anyway, I received a frantic call late last night, asking me to meet K up at a local KFC. My spider senses immediately went hay-wire, because responsible married women are not allowed that level of fine randomness at 10:30pm.

I met a lone K behind a tall glass of pepsi and an untouched KFC snack box. I slid into the booth next to her, forcing a toothy grin into what was obviously a strained situation. She didn't allow any complimentaries.

The situation:
K had dozed off with an unattended private brower left open and her husband, J had returned home from work earlier than usual. She said she woke up to find him reading the blog. She panicked and left the house.
Admittedly my response was not the ideal one, but i could not help the involuntary cackle that escaped my mouth "Kasala don burst all up in this place mehn!"

I am usually not one to do the 'I told you" routine, but i definitedly told K-and she did not listen. People need to listen to me more often, i tell ya. I recalled how i had dissected and fully explained the precariousness of the situation to her, even citing my own dilemmas with "blogging and the unknowing partner". Thing is, if you have blogged for..let's even cap at a minimum of twelve months...chances are, a significant part of you starts to get unravelled on these pages. And when the blog is annonymous,and your partner is unaware, then it becomes a certain type of infidelity. Private browsing, late night blog posting, unexplained friendships with people that you cannot rationally explain the origin of where you know them from...such is the life. One time, i watched K laugh off an enquiry from J, saying that a certain random female friend (blogger), whom she called up to get her out of a fix during her trip in gidi, was...just a friend who fell from the sky! And the lies and necessary deception carry on like a ball of hay down a straw mountain.

My advice then was simple: Kill the blog, OR run a massive EDIT programme and confess your sins to your hubby. She did neither and so here we were, watching an asian immigrant mop up KFC tiles at 11pm whilst ignoring a blarring mobile phone's incessant ringing.

"What's your plan now?" I always believe that you should give everybody the first chance to dig themselves out of their own scrape.
"I don't know! Come home with me, and help me talk to him."
"And tell him what, exactly?"
"That it is not my blog."
"I thought you said he has read it."
"I know. I'm still going to deny everything."
"K, anybody who knows you and reads that blog with any tinge of suspicion will immediately put one on one together. How else do you think i found out? There is no lawyer on earth that can win that level of denial to your husband."
"There is no evidence. I've deleted the blog."
"When?"
She showed me her android and the blogger interface and i knew K had gone mad.

Ofcourse, the finer details of what went on - as far as resolution goes, in K&J's house is best left undiscussed for obvious reasons.
But the situation still begs the question:
Is 'I do" = "I do not blog?"

I'm not talking here about the fine literary accomplishments of the Myne Whitmans or the faithful opinions and litanies of the Inyamu's Eldorado or Miss Fab's, which in their own right ought to be displayed without abandon for the world to appreciate and applaud. Instead, i am talking about the cacaphony of mid-life-crisis-type blog rants owned by supposed masked crazies who drink their lives full like tipsy glasses of fine chardonnay and tip over every intricate detail with reckless naked abandon on blinking blogger cursors. It is the nature of honesty in those pages that nobody is man(or woman) enough to own up to...And so the entries get fewer and fewer, until a sad day like this morning, when i key in the URL to one of my favourite blogs and get the unfortunate response:

Blog not found
Sorry, the blog you were looking for does not exist. However, the name "abcdef" is available to register!

It is indeed a sad sad day when a blog dies - just evaporates into thin air as if it was never there in the first place.
So, not entirely permitting five faithful years of blog diaries to simply poof into nothingness, here's a respectful salute to my girl K!

To all the lost ones...Veni, Vidi, Vici.


Someone better write me a neat moving piece when my time comes!